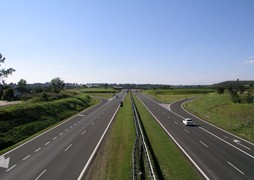 Question:
Cathy would like us to explain the differences among highway, freeway, and motorway.

Helen: One thing we can be sure of is that all three words are related to roads. However, they have slightly different meanings in America and in Britain.
Feifei: Okay.
Helen: Now, let’s explain them one by one. According to the Oxford Advanced Learner Dictionary, the word “highway” is commonly used in America, and it usually means a main road connecting large towns.
Feifei: A main road connecting large towns.
Helen: Highway in the UK means a public road, and it’s usually used in formal circumstances. It’s not a word that you hear in everyday conversations.
Feifei: Public road.
Helen: For example, the organization that is responsible for maintaining conditions of public roads is called the Highways Agency, and there’s also a booklet containing all the official rules about using public roads and that’s called the Highway Code.
Feifei: The Highways Agency. The Highway Code.
Helen: Now let’s focus on the word “freeway.” It’s used almost exclusively[独占地] in the US. It’s a wide road, with at least two lanes in each direction, and traffic can travel fast for long distances between large towns. Another expression we often hear in the States is “expressway.” It means the same thing as freeway. Finally, Cathy mentioned “motorway.” That’s a word we are very familiar with in the UK. And in the UK, motorways are given names like the M1, M2, and M6.
Feifei: And I hear the M25注 mentioned a lot on traffic news.
Helen: Well, the M25 is an orbital[轨道的] motorway on the outskirts[市郊] of London. It has also earned the nicknames “M25 Car Park” and “the Road to Hell.”

Examples of Traffic Terms:
Q: Where do pedestrians[行人] walk?
American: They walk on a sidewalk.
British: In Britain, pedestrians walk on a pavement.

Q: The quickest and cheapest way to travel around cities like London, New York, and Shanghai is?
American: On the subway. That’s the easiest way to get around in New York.
British: On the underground or the tube.

Q: What’s another word for taxi in the UK?
British: Cab. London is famous for its black cabs. They’re very spacious[宽敞的] and comfortable to sit in.

Helen: Sadly we have run out of time on this programme. It’s been interesting explaining some of the differences between American and British English.
Bye bye.