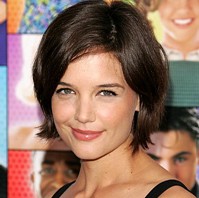 Wallflower“壁花”小姐
“A lot of people think that I just became this wallflower, this woman who doesn’t have any control of her life. And that’s pretty wrong.”
—Katie Holmes, on how people think she’s changed since marrying Tom Cruise.

Definition
A shy person who doesn’t like to participate in social activities.

Usage
Wallflower is the name of a plant with delicate orange or yellow blossoms that often grows along old walls or cliffs. It’s also what we call a quiet, antisocial person who is shy at parties. Katie Holmes says that the public thinks she’s turned into a wallflower because of her relationship with Tom Cruise. People say that he doesn’t let her go out very much or have many friends, but Katie says that isn’t true.

Being a wallflower isn’t all bad. Girls who get called wallflowers are often pretty and mysterious. They might seem really quiet at first, but once you notice them and talk to them, they’re actually really interesting. The singer Bob Dylan even has a love song called “Wallflower.” He sings, “Wallflower, wallflower, won’t you dance with me? I’m fallin’ in love with you.”

Examples
► At first, I didn’t notice Jane because she’s really a wallflower. But the minute I met her, I was in love!
一开始我并没有注意到简,因为她一言不发地坐在一边。但当我与她见面的那一刻,我便陷入了爱河!
► I tried not to be a wallflower at the party because I wanted to meet people, but it’s so hard for me to talk to people I don’t know.
我尝试过不要当舞会上的“壁花”小姐,因为我想结交多一些人,但是对我来说,和不认识的人交谈真是比登天还难。