明星：敞开心扉 Come out of my shell 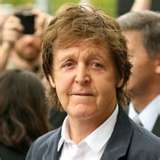 Come out of my shell 敞开心扉
“Once the seasons had gone around once, I started to notice a lightening of my mood. I was coming out of my shell a little bit.”
—Paul McCartney, talking about his sadness after his wife Linda died.
Definition
Stop being withdrawn; open your heart and mind to life; stop being insecure; stop being shy; become more confident.
Also means become happier and less upset; change your mood from bad to good; stop thinking about your sadness and start thinking about positive things.

Usage
You can use this phrase to describe a person who is becoming happier and more outgoing. For example, if one of your friends is very quiet and shy, but then starts acting more confident and social, he is “coming out of his shell”.
Someone who has been very sad for a long time, but is starting to feel better, is “coming out of his/her shell”.

Examples
★Mike used to be so shy. He was scared to talk to anybody. But now he always says “Hello” to me when I see him. Maybe he’s coming out of his shell. 迈克曾经很害羞,害怕与任何人讲话。但是他现在看到我总是主动与我打招呼。或许他正在慢慢地突破自己,敞开心扉与人交往。

★Jane was really sad after her mom died. She didn’t want to see anyone for months. But now she’s coming out of her shell. 自从简的妈妈去世之后,她一直非常悲痛。几个月来她都不想见任何人。但现在她开始慢慢敞开心扉了。