全面破解图坦卡蒙之谜 Behind the Mummy: The Real King Tutankhamun

It's hot inside the mummy's tomb. Yet no one is complaining. A member of my team holds up a small tool that looks like a corkscrew[螺丝锥]. He places it against the mummy's leg bone and cranks[转动曲柄] it. I wince[畏缩]. It makes a squeaking[发出短而尖的声音] sound as it bores[钻孔] into the ancient bone.
木乃伊的墓穴里很热，但是没有人抱怨。我的一名组员拿起一把样子有点像螺丝锥的小工具。他将工具放在木乃伊的腿骨上，然后转动手柄。我不禁有点畏缩。工具钻入这块古老的骨头时发出了吱吱的声音。 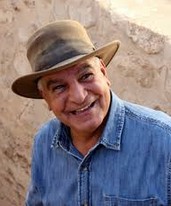 Hanging out with mummies may seem scary, but I do it all the time. I'm an archaeologist[考古学家]. You've probably seen photos of me in my Indiana Jones注 hat. I wear it most days to protect my eyes from the blazing[强烈的] sun. Working outside digging up ancient objects is hot, slow, dirty, and difficult work.
与木乃伊打交道听起来似乎很可怕，但我经常这样做。我是一名考古学家。你也许见过我戴着那顶印第安纳·琼斯帽子的照片。我经常戴着它，以保护眼睛免受强烈阳光的伤害。在户外挖掘古老物件是一桩酷热、缓慢而又困难的脏活。

Today, I'm inside one of the most famous tombs in the world. King Tut is buried here. His full name is Tutankhamun. I look more like a doctor than an archaeologist. I'm wearing a doctor's white lab coat. Surgical[外科的] gloves cover my hands. A surgical mask hides most of my face. Only my eyes are uncovered. I'm dressed to protect this marvelous mummy from dust and germs.
今天，我身处世界上最著名的其中一个墓穴。图坦王安葬于此。他的全名是图坦卡蒙。我看起来更像一位医生而不是考古学家。我身穿医生的实验白袍，手戴外科手套，脸的大部分都罩在外科面具下，只露出一双眼睛。我穿成这样是为了保护这具不可思议的木乃伊免受灰尘和细菌侵害。

Protecting Tut is important. He lived and died more than 3,000 years ago. We don't know much about that time.
Centuries passed. People forgot about Tut and where he was buried. Then about 90 years ago, archaeologists found his tomb. It's one of 63 tombs carved into cliffs in the middle of modern Egypt. So many kings are buried here, we call it the Valley of the Kings.
Over time, robbers raided many of the valley's royal tombs. Luckily, they never found Tut's tomb. It still held Tut's mummy and other artifacts[人造物品], or objects from the past.

We've learned much from the artifacts found in Tut's tomb. They tell a stunning[令人吃惊的] story about Tut. It's about a young prince. It's about a military leader. It's about a king who died before he could fully rule his kingdom.
The story begins with Tut's father, Akhenaten. He was the king of Egypt. Tut grew up in a city called Amarna. The palace there had courtyards with lush[青葱的] gardens and flowing fountains.
Tut became king after his father died. He was about nine. Most kings weren't that young. Nothing about Tut was typical, though. For example, he was a king with two crowns. That's because ancient Egypt was a divided country. A white crown represented[象征] one part of the country. A red crown represented the other. Wearing the two crowns meant Tut ruled both lands as one.
Tut may have had the crowns of power, but he didn't have real power. Because he was still a boy, he had adults who helped him rule. They had the real power. Just as Tut became old enough to rule on his own, he died. The question of how he died has been a great mystery.

How Tut lived might help answer how he died. The ancient artifacts from his tomb tell us much about his daily life.
图坦卡蒙的生活或许能解释其死因。墓穴内的古老制品向我们充分展示了他的日常生活。

From head to toe, he dressed well. Some of his clothes were plain. Others were covered in beads[珠子] and sewn with colorful threads[线]. He wore heavy gold bracelets[手镯], rings, necklaces, and even earrings. Some of his sandals[凉鞋] have painted portraits of his enemies. Every time Tut took a step, it looked like he was crushing[压碎] his foes[反对者，敌人].
他从头到脚都经过悉心打扮。他的一些衣服很简单，另一些则覆有珠子，并用彩色的线缝合。他戴上沉沉的金手镯、戒指、项链甚至耳环。他的一些凉鞋上画有敌人的画像。图坦卡蒙每踏出一步，就像是将敌人踩在脚下。

The king ate bread, cake, and meat. He munched[用力咀嚼] on chickpeas[鹰嘴豆], lentils[小扁豆], and vegetables. For dessert, he liked honey, dates, figs[无花果], and other fruits.
这位国王食用面包、蛋糕和肉。他用力地嚼鹰嘴豆、小扁豆和蔬菜。在甜品方面，他喜欢蜂蜜、枣、无花果和其他水果。

He may have liked to hunt. Images carved into a golden fan show Tut hunting ostriches[鸵鸟]. On one side, he is shooting at them from his chariot[战车].
On the other side, he is coming home with the birds he has killed.
Tut's life was not all fun and games, though. As king, he had to lead an army. Tut may have driven a chariot to lead his army as they battled Egypt's enemies.
It's not easy bouncing at high speed in a chariot, shooting arrows. It's even harder when foes are shooting back. So Tut had to practice. From chariot driving to
hunting, the ancient artifacts show a king who was active. Yet the more than 100 walking sticks[手杖] in Tut's tomb may tell us something else. Why would a young man need so many walking sticks? 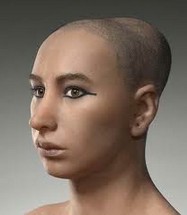 The answer to this question is also in Tut's tomb. No, it's not in the objects in the tomb. I now know it's in the mummy itself.
Archaeologists have studied Tut's mummy several times. They've taken x-rays that showed a hole in the back of the mummy's skull. The hole made many people—even me—think Tut had been murdered.
I examined Tut's mummy for the first time several years ago. I will never forget that moment. I never thought I would get the chance to be that close to him. When I looked into Tut's face, I felt such joy.
My team used a CT scanner to take 1,700 pictures of Tut's body. We used the pictures to make a three-dimensional image of him. This image told us that Tut died when he was 19. It also showed that a murderer didn't make the hole in the back of his head. Instead, mummy makers made it after Tut had died.
I was shocked. All my life, I thought this hole meant Tut had been murdered. Now I had to find what really killed him. I looked for new answers in the scan. It showed that Tut's left leg was broken. A wound over the break could have gotten infected[被感染的]. Infections can kill.
The scans also showed that Tut had a deformed[畸形的] foot. He had a bone disease. So the walking sticks were not just symbols of power. He needed a cane[手杖] to walk.

Everything was beginning to make sense. Still, I needed more information. That's why I took samples of the king's genes.
The tests confirmed that Tut had a bone disease. They also showed that he had malaria[疟疾].
It's a disease carried by infected mosquitoes[蚊子]. Their bite can kill their victims.
Putting everything together, I believe we have solved the mystery of Tut's death. The answers came from the walking sticks, the x-rays, the CT scans, the gene tests, and our thinking as scientists. Our theory is that Tut was weakened by a bone disease. When he broke his leg, an infection quickly spread. The infection and the malaria killed him.

At last, the case is closed, right? Not yet. I have new questions I hope to answer about this king and his family. I can't help it. I love digging into the unknown.