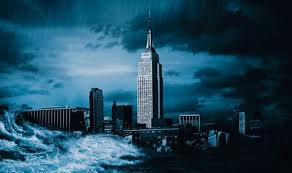 One day, overnight, the world turned violet. Just about everything turned violet from the sky and ocean and mountains to the trees and animals and people and from the tallest skyscrapers to the tiniest ant. People sat around1) looking at one another wondering if they were dreaming. But nobody woke up and things stayed violet, all except for a single Blue Jay who hadn't changed color and stayed the brightest blue.
Being the only thing in the world that wasn't violet, he was caught and put in a cage. People were shocked. Some were afraid and some were amazed and a few thought it funny, because along with everyone else, the President was very violet. Whole families were violet as were teachers, movie stars, doctors, nurses, gas station attendants2), the Queen of England, the President of Mozambique3), taxi-drivers, everybody. They went from place to place in their violet cars and buses and rode violet bikes and sat on violet furniture and ate violet food. Even Hershey's candy bars had turned all violet as had Skittles and M&M's. Girls generally thought this yucky4), but some boys thought it was pretty neat5).
The smartest scientists in the world gathered to figure it out. Was something wrong with people's eyes or was it a trick of nature? They did studies and tests and analyzed and evaluated and debated and wrote article after article, but couldn't explain it.

And no longer could people say they felt "blue" or were "green" with envy or had a "green" thumb6). So what they said and how they said it began to change. Some people said violet was now the most important color in the world because it was everywhere. Others said that violet had no importance at all because there was too much of it. They discussed and argued, joined clubs, held debates, wrote books, and produced movies all about the issue of the importance or unimportance of the color violet.
The color of the Blue Jay became a big issue because he had such a little bit of blue and the world had such a whole lot of violet. People argued about the importance of that. Some said the Blue Jay must be a very special bird or maybe not a bird at all because he alone had kept his true color. Others said this was silly, that the Blue Jay ate bird seed and drank water and fluffed7) his feathers and that other than his special color he was still just a bird.
It was exactly one year to the day after the world had turned violet that people awoke to find the world had turned yellow. All except the Blue Jay.
In some ways a yellow world isn't any different than a violet world. People simply said yellow instead of violet when they talked about things. Only now the Blue Jay was more important than ever because he alone had stayed the color blue and people argued about what that meant. They lined up for miles just to take a look at him.

For the next two years, exactly on the day the world had turned violet and then yellow, it turned new colors: first orange and then pink. Still the Blue Jay stayed blue, causing ever greater disagreement—until in the fifth year the whole world turned blue.
The first thing people asked was what about the Blue Jay. Had he stayed blue? Yes, he was still the same color. No longer were there two colors in the world, but just one—the color blue. And because the Blue Jay was a color like everybody and everything else people began to lose interest. Now that he was neither more nor less important crowds stopped coming and one day, six months into the year that the world had turned blue, somebody let him out of his cage and he flew off looking happy to be free.
The very next morning the world regained its rainbow of colors as if nothing had ever happened. At first this was a novelty8) but soon people forgot the world had once been all violet. They forgot the world had once turned yellow, then orange, then pink, and then blue. They returned to saying they felt "blue" or were "green" with envy or had a "green" thumb.
But on occasion9) they wondered where the Blue Jay had gone and how he was doing and, most of all, if he was still the color blue and what it had all meant.