I was right about the tar: it led to within half a mile of the shore. But when I got back there, with my boy, and we settled into a camp near a farmhouse and into the kind of summertime I had known, I could tell that it was going to be pretty much the same as it had been before—I knew it, lying in bed the first morning, smelling the bedroom, and hearing the boy sneak quietly out and go off along the shore in a boat. I began to sustain the illusion that he was I, and therefore, by simple transposition, that I was my father. This sensation persisted, kept 13)cropping up all the time we were there. It was not an entirely new feeling, but in this setting it grew much stronger. I seemed to be living a dual existence. I would be in the middle of some simple act, I would be picking up a bait box or laying down a table fork, or I would be saying something, and suddenly it would be not I but my father who was saying the words or making the gesture. It gave me a creepy sensation. 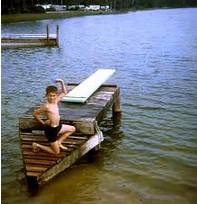 We went fishing the first morning. I felt the same damp moss covering the worms in the bait can, and saw the dragonfly 14)alight on the tip of my rod as it hovered a few inches from the surface of the water. It was the arrival of this fly that convinced me beyond any doubt that everything was as it always had been, that the years were a 15)mirage and there had been no years. The small waves were the same, 16)chucking the 17)rowboat under the chin as we fished at anchor, and the boat was the same boat, the same color green and under the floor-boards the same freshwater leavings and 18)debris—the 19)wisps of moss, the rusty discarded fishhook. We stared silently at the tips of our rods, at the dragonflies that came and went. I lowered the tip of mine into the water, 20)tentatively, 21)pensively 22)dislodging the fly, which 23)darted two feet away,24)poised, darted two feet back, and came to rest again a little farther up the rod. There had been no years between the 25)ducking of this dragonfly and the other one—the one that was part of memory. I looked at the boy, who was silently watching his fly, and it was my hands that held his rod, my eyes watching. I felt dizzy and didn't know which rod I was at the end of.
第一天早上，我们去钓鱼。饵料盒里盖住鱼虫的苔藓还如当年那般的潮湿，一只蜻蜓在水面上方几英寸处盘旋，然后落在我的鱼竿末梢。什么都没变，一切还是老样子，岁月是一场幻像，时光从未曾流逝，是这只不期而至的蜻蜓让我对此深信不疑。我们在湖中下锚垂钓，还是那样轻柔的波浪在我们眼下簇拥着轻舟，船也还是那样的船，漆着同样的绿色，还是同样的零碎杂物——小束的苔藓、生锈的鱼钩——被弃置在船内踏脚板条下。我们默默地盯着自己的竿梢，盯着不断飞来飞去的蜻蜓。我试探性地用竿梢蘸了下湖面，想赶走那只蜻蜓，它倏然飞出两英尺开外，悬停片刻，又疾飞回来，落在竿梢更远处。这一去一回之际，在它和我记忆中的那只蜻蜓之间，岁月了然无痕。我看了看儿子，他正默默地盯着他的蜻蜓，仿佛是我的手在握着他的鱼竿，是我的眼睛在盯着他的蜻蜓。我不禁目眩神迷，不知道守在哪根鱼竿旁边的才是我自己。

When we got back for a swim before lunch, the lake was exactly where we had left it, the same number of inches from the dock, and there was only the merest suggestion of a breeze. This seemed an utterly26)enchanted sea, this lake you could leave to its own devices for a few hours and come back to, and find that it had not stirred, this constant and trustworthy 27)body of water. In the shallows, the dark, water-soaked sticks and twigs, smooth and old, were 28)undulating in clusters on the bottom against the clean 29)ribbed sand, and the track of the 30)mussel was plain. A 31)school of 32)minnows swam by, each minnow with its small, individual shadow, doubling the attendance, so clear and sharp in the sunlight.
午饭前还有时间游泳，于是我们收竿返回码头，一切还是我们离开时的模样，水位标尺还是那个数字，只有清风徐徐，吹皱了湖面。这就像是被施了魔法的海洋，你自管去你想去处，不必顾虑它会有何变化，几个小时之后再回来，它还是那么从容淡定，波澜不兴，好一片让人放心的水域。滩头浅水处，湖底沙地干净整洁，纹路层叠，贻贝爬过的痕迹清晰可辨，或光滑或老朽的黑色枝桠被湖水浸透，在水底成簇起伏摇摆。阳光明媚，一群米诺鱼游来，每条小鱼都在湖底投下一条细小且清晰显眼的身影，数量顿增一倍。

Up to the farmhouse to dinner through the 33)teeming, dusty field, the road under our sneakers was only a two-track road. There had always been three tracks to choose from in choosing which track to walk in; now the choice was narrowed down to two. For a moment I missed terribly the middle alternative. But the way led past the tennis court, and something about the way it lay there in the sun reassured me; the 34)tape had loosened along the backline, the alleys were green with35)plantains and other weeds, and the net (installed in June and removed in September) 36)sagged in the dry noon, and the whole place steamed with midday heat and hunger and emptiness. There was a choice of pie for dessert, and one was blueberry and one was apple, and the waitresses were the same country girls, there having been no passage of time, only the illusion of it as in a dropped curtain.
穿过尘土飞扬的富饶田野，一直往高处走到农家用餐，脚下的路只有两条车道。从前这路上有三条道，随你喜欢走哪条，现在只有两条可以选了。有那么一会儿，那个消失的中间车道让我颇为感时伤怀。直到经过路边的网球场，看到阳光下的球场，我这才感到一丝慰藉：底线的标识胶带松脱，两侧通道绿茵茵地长满了车前草，还有些不知名的杂草，球网（每年六月份架起，到九月份拆除）在干燥的正午里没精打采地耷拉着，场地上弥漫着炙热和寂寥，有一种饥肠辘辘的感觉。午餐后的甜点有蓝莓馅和苹果馅派可供选择，服务员还是当年那样的乡下姑娘，令人怀疑这里久已被时光遗忘，仿佛雾里看花，一切都是昨日的幻像。

Summertime, oh summertime, pattern of life 37)indelible, the fade-proof lake, the woods unshatterable, the pasture with the 38)sweet fern and the 39)juniper forever and ever, summer without end; this was the background, and the life along the shore was the design, the cottages with their innocent and tranquil design. It seemed to me, as I kept remembering all this, that those times and those summers had been infinitely precious and worth saving. There had been 40)jollity and peace and goodness. The arriving (at the beginning of August) had been so big a business in itself, at the railway station the farm wagon drawn up, the first smell of the pine-laden air, the first glimpse of the smiling farmer, and the feel of the wagon under you for the long ten-mile haul, and at the top of the last long hill catching the first view of the lake after eleven months of not seeing this cherished body of water. The shouts and cries of the other campers when they saw you, and the trunks to be unpacked, to give up their rich burden. (Arriving was less exciting nowadays, when you sneaked up in your car and parked it under a tree near the camp and took out the bags and in five minutes it was all over, no fuss, no loud wonderful fuss about trunks.) 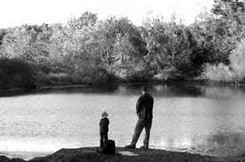