滚雪球：巴菲特和他的财富人生 The Snowball: Warren Buffett and the Business of Life 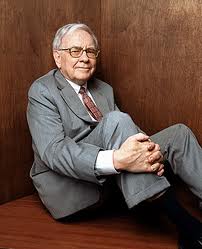 The first few cents Warren Buffett ever earned came from selling packs of chewing gum. And from the day he started selling—at six years of age—he showed an 1)unyielding attitude toward his customers that revealed much about his later style.
“I had this little green tray, which had five different areas in it. It had containers for five different brands of gum, Juicy Fruit, Spearmint, Doublemint, and so on. I would buy packs of gum from my grandfather and go around door to door in the neighborhood selling this stuff. I used to do that in the evening, largely.
“I remember a woman named Virginia Macoubrie saying, ‘I’ll take one stick of Juicy Fruit.’ I said, ‘We don’t break up packs of gum.’—I mean, I’ve got my principles. I still, to this day, remember Mrs. Macoubrie saying she wanted one stick. No, they were sold only in five-stick packs. They were a 2)nickel, and she wanted to spend a penny with me.”
Making a sale was tempting, but not tempting enough to change his mind. If he sold one stick to Virginia Macoubrie, he would have four sticks left to sell to somebody else, not worth the work or the risk. From each whole pack, he made two cents profit. He could hold those pennies, weighty and solid, in his palm. They became the first few 3)snowflakes in a snowball of money to come.
What Warren was willing to break up were red cartons of Coca-Cola, which he sold door to door on summer nights. He carried on selling them during family vacations, approaching 4)sunbathers around the shores of Lake Okoboji in Iowa. Soda pop was more profitable than chewing gum: He 5)netted a nickel for every six bottles, and stuffed these coins proudly into the ball-park-style nickel-plated money changer on his belt. He also wore it when he went door to door selling copies of the Saturday Evening Post and Liberty magazines.
The money changer made him feel professional. It 6)emblemized the part of selling that Warren most enjoyed: collecting. Although he now collected bottle caps, coins, and stamps, mainly, he collected cash. He kept his coins at home in a drawer, sometimes adding to the $20 his father had given him when he turned six, all recorded in a little 7)maroon passbook—his first bank account.
To his family’s amusement and surprise, by the spring of 1942, his 8)hoard totaled $120.
Enlisting his sister Doris as a partner, he bought three shares of a stock for each of them, costing him $114.75 for his three shares of Cities Service Preferred.
“I didn’t understand that stock very well when I bought it,” he says; he knew only that it was a favorite stock that 9)Howard had sold to his customers for years.
The market hit a low that June, and Cities Service Preferred plunged from $38.25 to $27 a share. Doris, he says, “reminded” him every day on the way to school that her stock was going down. Warren says he felt terribly responsible. So when the stock finally recovered, he sold at $40, netting a $5 profit for the two of them. “That’s when I knew that he knew what he was doing,” Doris recalls. But Cities Service quickly soared to $202 a share. Warren learned three lessons and would call this 10)episode one of the most important of his life. One lesson was not to overly 11)fixate on what he had paid for a stock. The second was not to rush unthinkingly to grab a small profit. He learned these two lessons by 12)brooding over the $492 he would have made had he been more patient. It had taken five years of work, since he was six years old, to save the $120 to buy this stock. Based on how much he currently made from selling golf balls or 13)peddling popcorn and peanuts at the ballpark, he realized that it could take years to earn back the profit he had “lost.” He would never, never, never forget this mistake.

And there was a third lesson, which was about investing other people’s money. If he made a mistake, it might get somebody upset at him. So he didn’t want to have responsibility for anyone else’s money unless he was sure he could succeed.

★ A public-opinion poll is no substitute for thought.
★ Risk comes from not knowing what you're doing.
★ You only have to do a verry few things right in your life so long as you don't do too many things wrong.
★ Chains ofhabit are too light to be felt until they are too heavy to be broken.
★ If past history was all there was to the game, the richest people would be librarians.
★ It takes 20 years to build a reputation and five minutes to ruin it. If you think about that, you'll do things differently.
★ Let blockheads read what blockheads wrote.