What Makes People Unhappy? —Excerpt from The Conquest of Happiness Animals are happy so long as they have health and enough to eat. Human beings, one feels, ought to be happy as well. However in the modern world, they are not—at least for the great majority of cases. Though the kinds are different, you will find that unhappiness meets you everywhere. Let us suppose that you are in New York, the most typically modern of the great cities. Stand in a busy street during working hours, or on a main 1)thoroughfare on the weekend, or at a 2)dance in the evening; empty your mind of your own ego, and let the personalities of the strangers about you take possession of you, one after another. You will find that each of these different crowds has its own troubles. For example, in the work-hour crowd you will see anxiety, excessive concentration, 3)dyspepsia, lack of interest in anything but the struggle, incapacity for play, an unconsciousness of their fellow creatures, etc.

The causes of these various kinds of unhappiness lie partly in the social system, and partly in individual psychology—which is, of course, itself, to a considerable extent, a product of the social system. What can a man or woman, 4)here and now, in the midst of our nostalgic society, do to achieve happiness for him or herself? My purpose is to suggest a 5)cure for the ordinary day-to-day unhappiness from which most people in civilized countries suffer, and which is all the more unbearable because, having no obvious external cause, it appears inescapable. I believe this unhappiness to be very largely due to mistaken views of the world, mistaken ethics, and mistaken habits of life all leading to the destruction of that natural 6)zest and 7)appetite for possible things upon which all happiness, whether of men or animals, ultimately depends.

I was not born happy. As a child, my favorite 8)hymn was: “Weary of earth and 9)laden with my sin.” At the age of five I reflected that, if I should live to be seventy, I had only endured, so far, a fourteenth part of my whole life. I felt the long, spread out boredom ahead of me to be almost unendurable. In adolescence, I hated life and was continually on the verge of suicide. Luckily, I was restrained by the desire to know more mathematics. Now, on the contrary, I enjoy life; I might almost say that with every year that passes I enjoy it more. This is due partly to having discovered what the things were that I most desired and gradually acquiring many of these things. Partly it is due to having successfully dismissed certain objects of desire—such as the acquisition of 10)indubitable knowledge about something or other—as essentially unattainable. But, very largely, it is due to a diminishing 11)preoccupation with myself. 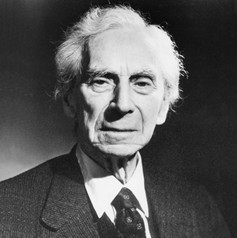 Gradually I learned to be indifferent to myself and my deficiencies; I came to center my attention increasingly upon external objects: the state of the world, various 12)branches of knowledge, individuals for whom I felt affection. External interests, it is true, each bring their own possibility of pain: the world may be plunged into war, knowledge in some direction may be hard to achieve, or friends may die. But pains of these kinds do not destroy the essential quality of life the same way that those springing from self-disgust do. And every external interest inspires some activity which, so long as the interest remains alive, is a complete preventive of 13)ennui. External discipline is the only road to happiness for those unfortunates whose 14)self-absorption is too profound to be cured in any other way.

The typical unhappy man is one who, having been deprived in youth of some normal satisfaction, has come to value this one kind of satisfaction more than any other, and has therefore given his life a one-sided direction, together with a quite undue emphasis upon achievement as opposed to the activities connected with it. There is, however, a further development which is very common in the present day. A man may feel so completely 15)thwarted that he seeks no form of satisfaction, but only distraction and 16)oblivion. He then becomes a devotee of “pleasure.” That is to say he seeks to make life bearable by becoming less alive. For the man who seeks 17)intoxication, in whatever form, has given up hope except in oblivion. In his case, the first thing to be done is to persuade him that happiness is, in fact, desirable.