麦田里的守望者(节选) The Catcher in the Rye (Excerpt) 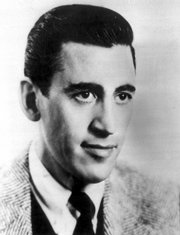 “You know that song ‘If a body catch a body comin’ through the rye’? I’d like—”

“I know it’s a poem by Robert Burns.”

She was right, though. It is “If a body meet a body coming through the rye.” I didn’t know it then, though.

“I thought it was ‘If a body catch a body,’” I said. “Anyway, I keep picturing all these little kids playing some game in this big field of rye and all. Thousands of little kids, and nobody’s around—nobody big, I mean—except me. And I’m standing on the edge of some crazy cliff. What I have to do, I have to catch everybody if they start to go over the cliff—I mean if they’re running and they don’t look where they’re going I have to come out from somewhere and catch them. That’s all I’d do all day. I’d just be the catcher in the rye and all. I know it’s crazy, but that’s the only thing I’d really like to be. I know it’s crazy.”

Old Phoebe didn’t say anything for a long time. Then, when she said something, all she said was, “Daddy’s going to kill you.” 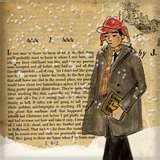 It was Monday and all, and pretty near Christmas, and all the stores were open. So it wasn’t too bad walking on Fifth Avenue. It was fairly Christmasy. All those 4)scraggy-looking Santa Clauses were standing on corners ringing those bells, and the 5)Salvation Army girls, the ones that don’t wear any lipstick or anything, were ringing bells too. I 6)sort of kept looking around for those two nuns I’d met at breakfast the day before, but I didn’t see them. I knew I wouldn’t, because they’d told me they’d come to New York to be schoolteachers, but I kept looking for them anyway. Anyway, it was pretty Christmasy all of a sudden. A million little kids were downtown with their mothers, getting on and off buses and coming in and out of stores. I wished old Phoebe was around. She’s not little enough any more to go stark staring mad in the toy department, but she enjoys 7)horsing around and looking at the people. The Christmas before last I took her downtown shopping with me. We had a 8)helluva time. I think it was in 9)Bloomingdale’s. We went in the shoe department and we pretended she—old Phoebe—wanted to get a pair of those very high storm shoes, the kind that have about a million holes to 10)lace up. We had the poor salesman guy going crazy. Old Phoebe tried on about twenty pairs, and each time the poor guy had to lace one shoe all the way up. It was a 11)dirty trick, but it killed old Phoebe. We finally bought a pair of 12)moccasins and charged them. The salesman was very nice about it. I think he knew we were horsing around, because old Phoebe always starts giggling.

Anyway, I kept walking and walking up Fifth Avenue, without any tie on or anything. Then all of a sudden, something very 13)spooky started happening. Every time I came to the end of a block and stepped off the goddam 14)curb, I had this feeling that I’d never get to the other side of the street. I thought I’d just go down, down, down, and nobody’d ever see me again. Boy, did it scare me. You can’t imagine. I started sweating 15)like a bastard—my whole shirt and underwear and everything. Then I started doing something else. Every time I’d get to the end of a block I’d make believe I was talking to my brother Allie. I’d say to him, “Allie, don’t let me disappear. Allie, don’t let me disappear. Allie, don’t let me disappear. Please, Allie.” And then when I’d reach the other side of the street without disappearing, I’d thank him. Then it would start all over again as soon as I got to the next corner. But I kept going and all. I was sort of afraid to stop, I think—I don’t remember, to tell you the truth. I know I didn’t stop until I was way up in the Sixties, past the zoo and all. Then I sat down on this bench. I could hardly get my breath, and I was still sweating like a bastard. I sat there, I guess, for about an hour. Finally, what I decided I’d do, I decided I’d go away. I decided I’d never go home again and I’d never go away to another school again. I decided I’d just see old Phoebe and sort of say goodbye to her and all, and give her back her Christmas 16)dough, and then I’d start hitchhiking my way out West. What I’d do, I figured, I’d go down to the 17)Holland Tunnel and 18)bum a ride, and then I’d bum another one, and another one, and another one and in a few days I’d be somewhere out West where it was very pretty and sunny and where nobody’d know me and I’d get a job. I figured I could get a job at a filling station somewhere, putting gas and oil in people’s cars. I didn’t care what kind of job it was, though. Just so people didn’t know me and I didn’t know anybody. I thought what I’d do was, I’d pretend I was one of those 19)deaf-mutes. That way I wouldn’t have to have any goddam stupid useless conversations with anybody. If anybody wanted to tell me something, they’d have to write it on a piece of paper and shove it over to me. They’d get bored as hell doing that after a while, and then I’d be through with having conversations for the rest of my life. Everybody’d think I was just a poor deaf-mute bastard and they’d leave me alone. They’d let me put gas and oil in their stupid cars, and they’d pay me a salary and all for it, and I’d build me a little cabin somewhere with the dough I made and live there for the rest of life. I’d build it right near the woods, but not right in them, because I’d want it to be sunny as hell all the time. I’d cook all my own food, and later on, if I wanted to get married or something, I’d meet this beautiful girl that was also a deaf-mute and we’d get married. She’d come and live in my cabin with me, and if she wanted to say anything to me, she’d have to write it on a goddam piece of paper, like everybody else. If we had any children, we’d hide them somewhere. We could buy them a lot of books and teach them how to read and write by ourselves.